As part of your ICS membership you get exclusive discounts, and so much more.

Katherine Elizabeth is an award-winning milliner based in central London with a Flagship store in the iconic Oxo Tower.
Katherine is also an associate of the British Millinery Association.

After graduating from the Surrey Institute of Art and Design, Katherine began her career in millinery under the talented eye of Stephen Jones, creating pieces for the Dior runway shows and the John Galliano boutique in Paris. After working with Catherine Delaney in theatre and film, Katherine set up her own millinery house in Clerkenwell before moving to the iconic Oxo Tower.

“To create a hat, is to create a piece of art.”
— Katherine Elizabeth

She is also a Member of the Walpole British Luxury group and has guest presented for the BBC’s Royal Ascot Ladies Day, and was also commissioned to create the hat for the official Kate Middleton Princess Catherine doll. Katherine has also had the wonderful opportunity of discussing hats with Camilla the Duchess of Cornwall.

Katherine has also appeared on Goodwood coverage via ITV with Mark Hayes – stylist on the Lorraine Show.

Katherine Elizabeth is an award-winning milliner, whose achievements include the Walpole Crafted scheme, Lff Profile Awards and Dzina Fashion Awards.  She was part of the 2011 Walpole Crafted Scheme for the highest achieving craft professionals of their respective fields. In addition, Katherine won the 'Accessories Designer Award' by Profile, resulting in her designing a collection for the Hobbs King's Road Store.

In 2012 Katherine won the London Lifestyle Award for Best Fashion Retailer, being voted the winner out of over a thousand retailers.

I take my inspiration from sculptural art, architecture and nature, pulling all of these elements together in my designs.  Like a conceptual sculpture, no two of my designs are ever the same.

To me, a hat isn’t something you should wear because you feel you have too.  I design hats to empower and give confidence to the wearer.  I believe every hat should be a sculpture that enhances both your features and your outfit.

Back to Clothing, Beauty & Cosmetics 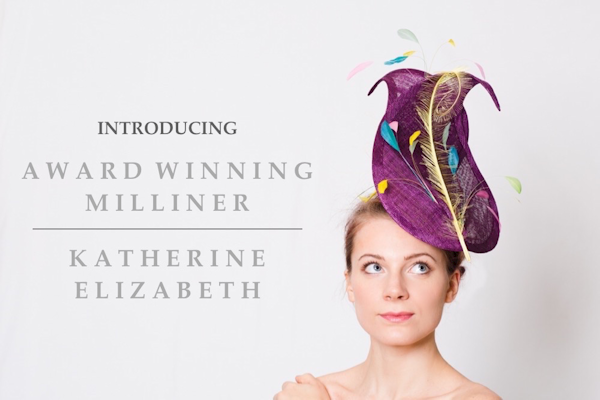